Cherry Glazerr, Palehound, and The Corner Girls at the Gothic Theatre in Englewood, CO on 3/1/19.

It’s been three years since I’ve seen Cherry Glazerr. It was back when the band opened for another Los Angeles female fronted group named Best Coast. Click here for that review.  Twenty-two-year-old lead singer Clementine Creevy has matured and so has the band’s music. Their first album had songs about realty television star Rob Kardashian (Teenage Girl) and a sandwich (Grilled Cheese). Their newest material tackles subjects like self-doubt (Stupid Fish) and toxic masculinity (Daddi). Cherry Glazerr’s line up has changed as well. Synth player Sasami Ashworth left to pursue a solo career and Sean Redman has been replaced by Devin O’Brien on bass. 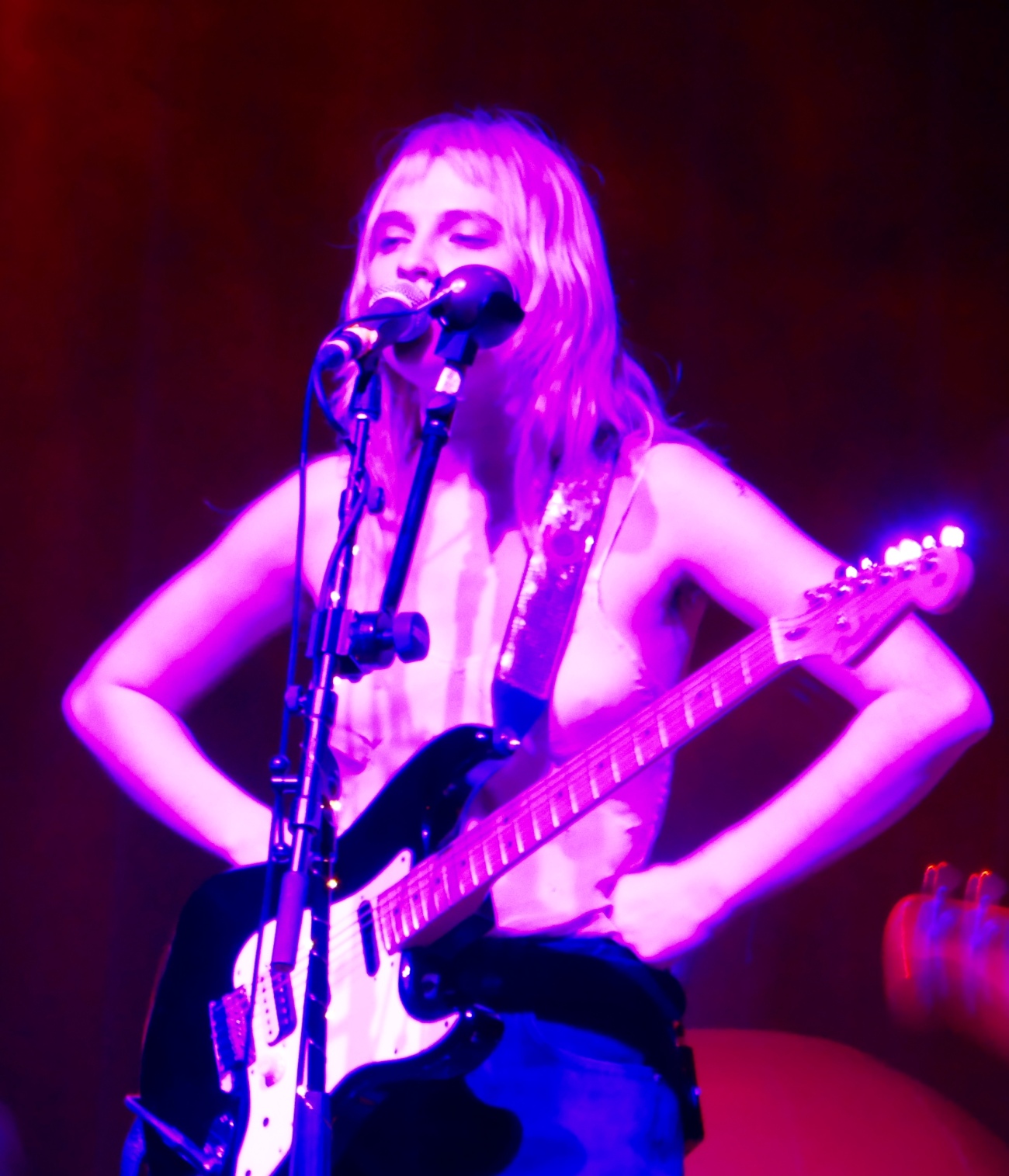 The stage had two gigantic cherries along with a sparkly white glacier (in case you forgot the band’s name). Creevy was dressed in a white tank top that prominently displayed her underarm hair. The band started out with Ohio a song about isolation from their latest album Stuffed & Ready. After some lovely low-fi strumming, the tune exploded with Tabor Allen’s thunderous drumming. The deeply personal songs Self Explained and Nurse Ratched followed. At that moment, Creevy asked, “Where are my trash people at?” That’s when the band performed Trash People – “We can’t live a nine-to-five/Art is love and love is sloppy/Nothing is all pure/Nothing is all dirty.” During the encore the band played LCD Soundsystem’s Time to Get Away showcasing Creevy’s snake dance moves while O’Brien played his funkiest bass lines of the night. Cherry Glazerr ended with Told You I’d Be with the Guys about female empowerment that had the crowd moshing along with the singer that Vice Magazine proclaimed “The Millennial Punk Feminist Icon.”

Second on the bill was Palehound a Boston band fronted by prolific songwriter Ellen Kempner. The band started with a song about coping with the death of friend entitled If You Met Her – “Now it’s April 6th/First one that you’ll miss/’Cause you’re off with all the cancers/You were young but you’ve got the answers/To the questions that your parents pointed to their God.” I would have liked to hear it. But three lushes in front of us decided to turn their backs to the band and have their own loud gabfest. Kempner introduced their song Killer by saying, “It’s about killing your local rapist.” That’s when one of the drunks started swaying back and forth while attempting to text. When the “ladies” finally decided to go to the bar, I could finally hear the music. I was impressed how Jesse Weiss’ drumming and Larz Brogan’s bass playing were perfect compliments to Kempner’s fuzzy guitar sound. Towards the end of their set, the band proclaimed it was Solonge Day. I thought it was some kind of breath freshener. It turned out to be Beyoncé’s sister. Her album had a surprise release that day. Palehound declared they would listen to it on repeat for the entire ten-hour drive to their next gig. Hopefully boozehounds didn’t disrupt their listening party.

Opening the show was Denver’s own The Corner Girls. The trio played several songs without stopping “to sound professional” according to lead singer Breanna Ahlgren. The band describes their sound as Pastel Punk their “own brand of punk music that ditches violence and masculinity for unapologetically feminine music centering the female perspective that all can enjoy (with glitter).” The band performed songs about hating your friend’s love interest (Boyfriend), getting guys to buy your drinks (Moochers), and encountering shallow men on their social media apps (Cellphone). Although the fast pace of their performance left the band breathless, the crowd loved every minute of it. Madeline Pietruszka kept up with Ahlgren’s rapid speed on the drums while singing backup vocals. Jessica Pulido looked exceptionally cool dressed in white playing her bass in the dark corner of the stage. The Corner Girls ended their set by leading the crowd in a sing-along to Whose a Better Kisser Me or My Sister.

See you at the next show. I’ll be the one wearing a white tank top displaying my body hair.