Margo Price and William Tyler at the Bluebird Theatre in Denver, CO on 10/24/16. 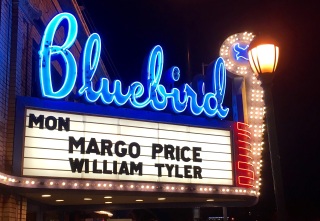 Forgoing seeing the Denver Broncos play on Monday Night Football, I headed down to the Bluebird Theatre to witness what Modern Traditional Country Music sounds like… It sounds like Margo Price.

The audience was a mixture of cowboys in their black hats and plaid shirts, women in their skirts and expensive cowboy boots, and hipsters with their beards and lack of hygiene.  They were gathered there to witness an artist who not only performs Country Music, but also lives Country Music.

Broke and desperate, long time Nashville musician Margo Price sold her car and wedding ring to make an album at the legendary Sun Studios in Memphis, Tennessee (where Johnny Cash and Elvis Presley recorded their first hits).  After being turned down by numerous labels, Jack White (my lord and savior) signed her to his label Third Man Records.  Being the label’s first Country Artist, people took notice.  Price appeared on Saturday Night Live, The Tonight Show, and Prairie Home Companion. She has been hitting the road playing small venues between performing with musical legends like Willie Nelson and John Prine.

Every member of her band is so talented each of them could headline their own show (okay, the drummer’s show might be awkward).  After the band’s instrumental build-up, Price took the stage and had the audience captivated instantly.  She sounds like a cross between Loretta Lynn and Dolly Parton mixed with a rock and roll attitude.

Margo Price’s set list mostly focused on material from her debut album Midwest Farmer’s Daughter which is about her life as …. a farmer’s daughter from Aledo, Illinois. The songs give the listener great insight to the heart of the artist.  Since You Put Me Down states, “I’m an outcast and I’m a stray/And I plan to stay that way.”  Price mixed it up and played Merle Haggard’s Red Bandana and Loretta Lynn’s Rated X (it’s about divorce get your mind out of the gutter). Price shared how she recently got a text asking if she would like to sing Me and Bobby McGee with Kris Kristofferson at a music festival.  She found herself on stage next to him thirty minutes later.

Price introduced here husband Jeremy Ivey as her “Baby Daddy.”  The two had great chemistry while he played harmonica next to her while she strummed and crooned. Performing Four Years of Chances, Price looked his way when she sang the lyric “He loves me every moment/Of them three hundred sixty-five days.”

A sad tale about her time spent at the Davidson Country Jail introduced the song Weekender. The moral of the story was to avoid drinking and driving especially if the result is hitting a telephone pole in front of police officers.

The opener William Tyler joined them for their final song Rodney Crowell’s I Ain’t Living Long Like This.  With Price’s authentic talent and her band’s excellent musicianship, they ain’t going to play small venues like this much longer.

Nashville guitarist William Tyler was the opening act.  Since he played a solo instrumental set, it was interesting to see most of the bejeweled cowboy booted women in the audience just fold their arms while the bearded hipsters bobbed their head to every note. Tyler’s latest album is entitled Modern Country.  He stated that it’s misleading since it’s not modern or country.  The theme of the album is a disappearing America.  Tyler explained the song Going Clear being about the instant an AM radio station signal disappears as you drive on a highway late at night.  He described the experience as “better than drugs.”  Tyler, an established Nashville session player, expressed his gratitude of playing with his long time friend Margo Price.  When he later joined Price on stage, his guitar playing was amplified by her band and switching to a Stratocaster.