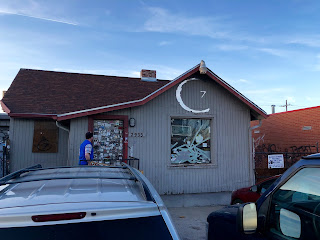 7th Circle Music Collective is not your typical venue. A small building near Mile High Stadium is the passageway into a DIY music space.  Once inside a tattered sign states, “Do not bring in any: glass, drugs, weapons, racism, sexism, homophobia, transphobia, xenophobia, elitism, or bad attitudes.”  Two easygoing volunteers explained there was no entrance fee, but a suggested donation. After contributing the requested amount, we discovered there was no alcohol or food available.  One of our friends immediately fled (he later returned with a six-pack).

At that moment, we heard guitars buzzing beyond the door. Following the music, we found our way into a courtyard. A few people were lingering around someone selling beaded jewelry. A garage with graffiti all over it contained a small stage with a band doing a sound check.  After the musicians declared the levels were good enough, the punk band Doc Rotten started their show.

The band fired up the crowd with their opening song Brass Tacks.  Drummer A.J. Martinez played some impressive thunderous fills that persuaded everyone hanging outside to come into the garage. Lead singer/guitarist Wes Bentley sang with such punk spirit it looked like he was about to lunge into the audience. Better Days was next with almost every member of the band singing a verse while Andy Kay held the chaos together with his impressive guitar riffs.  The song describes how music can help people deal with life’s challenges.  “When we lose all control/When we hear that rock and roll/It gets us through when times they have changed/Here’s to Better Days.“

Gates was the first song they played from their new EP. It was full of heavy base, stomping drums, rhythmic time changes, and lyrics proclaiming something about, “Never coming home” all in less than two minutes.
A thin man dressed in all black wearing a bowler hat attempted to jump on the stage during their cover of a classic Cock Sparrer song.  When he fell, the band invited him to grab a microphone.  A grinning Bently stated, “I am glad to see a display of true punk rock.”  The title track of their latest EP Sick and Suffering explored the complicated issue of drug abuse.  It’s a serious song because it’s the longest one of their EP (three minutes and fifteen seconds). The set ended with Listen Up! Doc Rotten encouraged the audience to sing along to the chorus that repeats the phrase, “Punch You in the Skull.”

The release of their EP Sick and Suffering has given the Trenton, NJ punk band a great reason to hit the road.  Their April tour took them through six states in a van that sleeps all four members (not comfortably). The 7th Circle Music Collective was their second Denver show (they headlined the Streets of London Pub the previous night).

After the show Wes Bentley told us a few tales of the tour. Highlights were staying at a musician outpost in El Paso, TX, visiting the beaches in Pensacola, FL, and yet another guy rushing the stage.  The band will be in Japan in September and Europe in October spreading the joy of Doc Rotten music to the world.

See you at the next show.  I’ll be the one rushing the stage in a bowler hat.