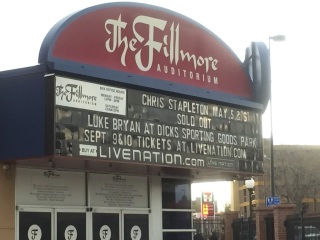 Tom Petty describes modern country music as “bad rock with a fiddle.”  I do like some country. But I find most of it filled with generic songs about trucks, dirt roads, and girls in tight jeans. Chris Stapleton is starting to change my perception.  He has brought back songs with vivid lyrics, a powerful voice, and soulful guitar playing.  Stapleton left a successful career as a song writer for Adele, Darius Rucker, and Kenny Chesney (to name only a few ) to step out in front of the mic

I attended the second night of a sold out run at The Fillmore Auditorium.  The cowboy boot wearing crowd filed into the auditorium with their Tennessee Whiskey and Strawberry Wine breath and love for the long haired, bushy beard, teddy bear shaped man about to take the stage.

The band consisted of bass player J.T. Cure,  drummer Derek Mixon, Stapleton’s wife vocalist Morgane Hayes-Stapleton, and legendary long time Willie Nelson harmonica player Mickey Raphael (he is so famous there were Mickey t-shirts at the merch both). The audience sang along from the beginning of his set with Nobody to Blame to the last song of the night.  During Fire Away, a security guard even waved his arm like a conductor when the crowd sang the chorus.  Morgane Hayes-Stapleton stated that it was the loudest a crowd has ever sang (not the best Denver, the loudest).

The most heart felt songs were when Chris Stapleton looked into his wife’s eyes while she provided harmonies that made his roaring voice even more powerful.  Their duet of You Are My Sunshine gave off a definite Johnny Cash and June Carter Cash vibe.

Chris Stapleton shared a story about when Merle Haggard sent a legal Colorado substance to Stapleton’s tour bus when they shared a stage.  Instead of smoking it, Stapleton kept it.  Making it a perfect introduction to his song Might as Well Get Stoned.

Stapleton displayed his vocal range by singing the long introductions of his band that magically turned into his hit Tennessee Whiskey.

When the band returned for the encore, Stapleton showed off his guitar skills with Outlaw State of Mind.  No wonder he was chosen to perform along with Bonnie Rait and Gary Clark Jr. for B.B. King’s Grammy Tribute The Thrill is Gone.  He has a slow raw note bending style.  When Stapleton returns to Denver, it will be in a larger venue to fit more fans to sing along.

Anderson East opened the show with a rhythm and blues set complete with a horn section and keyboard player.  The Athens, Alabama native lead his band though a high energy set.  His song Satisfy Me has a Joe Cocker/Wilson Picket vibe.  The set included a soul cover version of David Bowie’s Rebel Rebel and a perfect rendition of Van Morrison’s Tupelo Honey.  The tribute covers kept coming when his guitarist The Reverend (when he speaks, he speaks the truth) preached Prince’s Dearly Beloved Sermon from as an introduction to Prince’s I Would Die 4 U.  East will be opening for The Dixie Chicks this summer.

I left the show with a little more hope for the state of country music.  Maybe the truck, dirt road, girls in tight jeans generic genre is changing for the better.

See you at the next show.  I will be the one drinking Tennessee Whisky.  Second thought…. I’ll stick to beer.