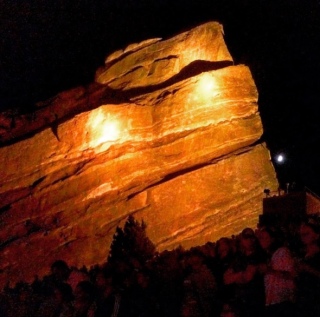 Walking up the stairs leading into Red Rocks Amphitheatre, it appeared the entryway was closed due to a number of people gathered by the gateway.  When I got closer, I realized it wasn’t a line… just music fans of advanced years trying to catch their breath from the steep climb.  It occurred to me that I might not be the Old Guy at the Show tonight.

B.B. King stated, “Bonnie Raitt was one of the best damn slide guitar players (ever).”  Rolling Stone Magazine ranks her in the top 100 best guitar players of all time.  She has a distinctive guitar tone, an amazing soulful voice, and a loyal fan base that has given her a career for over forty years.

Bonnie Raitt started with INXS’ I Need You Tonight from her latest album Dig in Deep (her 20th studio album).  She reshaped the 1980’s pop classic into a slow sexy blues number. Since Raitt has made a career transforming other artists’ music into her own, it was a perfect indicator of the night to come.  A few songs later, Raitt covered Los Lobos’ Shakin’ Shakin’ Shake.  The sign language interrupter off to the side of the stage momentarily stole the spotlight with her expressive signing and dancing (signing a song about shakin’ sure looks like fun).

Opener Richard Thompson joined her to play guitar on Not the Only One (he played guitar on the 1991 record).  Thompson continued to play while Bonnie Raitt covered his song Dimming of the Lights. It was momentous to see two legendary musicians perform together.

Her version of John Prine’s Angel From Montgomery was the highlight of the evening.  Armed with only an acoustic guitar, Raitt’s voice combined with the heart breaking lyrics echoing off the rocks on a perfect summer night melted the audience hearts… “just give me one thing that I can hold on to /to believe in this living is just a hard way to go.“

Keyboardist Mike Finnigan took over vocals for a cover of B.B. King’s Don’t Answer the Door.  “Yes, I don’t want you to open the door for anybody, woman/ oh, when you’re home and you know you’re all alone.” He made the paranoid delusional hostage taking lyrics fun.  It made you want to dance instead of call the authorities.

Bonnie Raitt declared, “I am going to play this heart-breaking song because it comes with the gig” as an introduction to I Can’t Make You Love Me.  She played it on the keyboard with a slight delay for dramatic effect.   Raitt sang with such strong emotion the audience had a collective sigh when it ended.

When she wasn’t talking about the upcoming election or fracking between songs (in her charming non-preachy way), Raitt continuously reapplied lipstick.  She didn’t want to appear as a frazzled red dot for the fans in the cheap seats.  Raitt joked it the real reason behind her strict no camera policy.  It was lifted for the last song Your Sweet and Shinny Eyes.  Raitt remarked, “Look at all those fireflies coming out.”

The Richard Thompson Electric Trio opened the show.  Thompson is a renowned musician that has been performing since the late 1960’s. He started with the rocking Fork in the Road from last year’s Still album.  With his British accent Thompson clarified the title was Fork and to get your minds out of the gutter.  My favorite moment was when he put down his Stratocaster and picked up his acoustic guitar to play 1952 Vincent Black Lightning.  His unique finger picking was impressive and the song is my favorite motorcycle ballad ever (okay… it’s the only motorcycle ballad I know).

My Mother stated if I thought the crowd was of advanced years, she remembers Bonnie Raitt’s late father John Raitt performing on Broadway.  See you at the next show.  I’ll be the one contemplating about re-naming his blog.