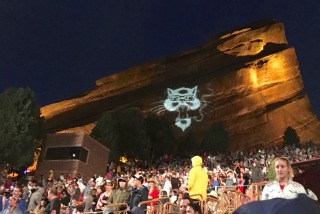 Blues Traveler has played Red Rocks Amphitheatre on the 4th of July for more than two decades.  I have attended a number of the shows including their first appearance at the venue opening for The Allman Brothers Band in 1992 (remember I am the Old Guy at the show).  The band seemed just as excited to be there as the rain soaked fans.  They expressed their appreciation by tossing out gifts into the audience.  A number of harmonicas were thrown into the crowd, a guitar was handed to a young blonde woman in the front row, and I caught one of John Popper’s signature Stetson black hats.  I guess it pays off to wait in line for hours for a good seat.  It also pays off to be a good-looking blonde chick.  Apparently, that gets you a guitar.

Singer and harmonica player extraordinaire John Popper started Blues Traveler in Princeton, New Jersey in 1987.  I describe them as a jam band with good songs.  Surviving the 90’s jam band explosion, death of their bass player, and a number of Popper’s medical issues, the band is still vital and relevant.  My favorite performances of the night were the ballads The Mountains Win Again with Popper’s strong voice making the hair stick up on the back of my neck. Also, Cara Let the Moon with Popper’s powerful voice accompanied by keyboard player Ben Wilson bouncing off the surounding rocks.

The set list had a number of their hits such as Run-Around, Hook, and But Anyway sprinkled in with some cleaver covers such as Radio Head’s Creep and Sublime’s What I Got.  Of course, John Popper played an amazing version of The Star Spangled Banner on the harmonica because it was the 4th of July after all.

They had a number of guests join them.  Oteil Burbridge a jam band base player super-star who has performed with The Derek Trucks Band, Trey Anastasio, and The Allman Brothers Band came out and had a base-off with bassist Tad Kinchla. It was the finest base-off I have ever seen (it was the only base off I have ever seen).   Soulive guitarist Eric Krasno came out to play on Father John during their encore. All three openers also took turns performing with the band.

Thompson Square, a Nashville pop country duo, joined the band to perform I Still Can Feel You and Matador (songs they recorded with Blues Traveler on last year’s Blow up the Moon album).  It was a highlight for me because that’s when John Popper threw me his hat.

Thompson Square was one of three openers for the night.  The husband and wife duo appeared grateful for the opportunity to play the historic venue.  They introduced themselves to the jam-band crowd very aware that the majority of the crowd didn’t know who they were.  They have multiple top ten country radio hits such as Are You Going to Kiss Me or Not.  Shawna Thompson gave a passionate performance in tight leather pants despite having a baby boy in the beginning of the year.  Keifer Thompson sneaked in some Nirvana’s Smell’s Like Teen Spirit into their set list to appease the crowd.

Looking like someone they randomly picked out of the crowd, Uncle Kracker was the middle act.  Since Mathew Shafer aka Uncle Kracker started out as Kid Rock’s turntablist, it was fitting he began his set with Kid Rock’s All Summer Long (which is really Lynyrd Skynyrd’s Sweet Home Alabama).  Shafer, quickly went through his hits.  Follow Me was the song, the crowd recognized.  The people around me didn’t know whom he was until that song started.  Later Uncle Kracker joined Blues Traveler on stage to perform Sublime’s What I Got.

Opening up the show was Sam Palladio.  Despite the fact he is a Country singer from England performing on the holiday that celebrates our independence from his native land, he was actually pretty good.  He has a recurring role as Gunner on the drama series Nashville.  If you don’t know that show (I don’t know the show), you probably haven’t heard of him.  The few in the crowd that follow the show were delighted to see the handsome brit.  When he played the song Fade into You from the Nashville series, the crowd started to pay attention.  He won the crowd over when he performed an Incubus song.  I would tell you the song, but I know as much about Incubus than I do about the Nashville series.

Blues Traveler made the crowd feel like they were joining a party instead of watching a show.  The way all the opening bands and the special guests just dropped by was part of the festive atmosphere the band created.  It’s no wonder this party has been going on for so long.

See you at the next show.  I will be the guy wearing John Popper’s hat.