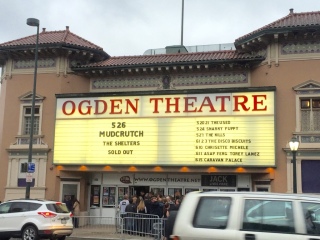 It only took minutes for the show to sell out when it was announced that Tom Petty was getting the band back together. It’s not the Heartbreakers. It’s Mudcrutch. The band he was in forty-six years ago in Gainesville, Florida before making rock and roll history a few years later with the Heartbreakers.  After reuniting in 2008, Mudcrutch has gotten back together again for another album and a small club tour. The ones lucky enough to get tickets (or the ones that sold their first born to scalpers) got a chance to see a rock icon in the intimate setting of the 1,600 capacity Odgen Theatre.  Die hard fans (yes… I was one of them) waited in the rain for hours until the doors finally opened to get close to the stage.  Nobody seemed to mind feeling like wet dogs because we all knew we were going to witness something special.

A bearded Tom Petty took the stage in his standard Tom Pettyish vest.  He quickly responded to the crowd shouting for Heartbreakers hits, “We are not going to be doing that tonight.  But we will try to give you everything you need.”  With two albums of Mudcrutch songs and freedom not to sing the hits (free from playing Free Fallin’), he seemed thrilled.

Petty played bass instead of his usual Rickenbacker guitar just like he did with Mudcrutch originally.  He let other members sing lead on a few songs while sneaking drags off a constant burning cigarette siting on the drum riser.  But Petty was front and center for Mudcrutch’s psychedelic bluegrass glory.

Mudcrutch has Mike Campbell (also a member of the Heartbreakers) an under-rated guitar wizard who has played with the likes of Don Henley, George Harrison, and Bob Dylan.  He sang Victim of Circumstance with an astonishing guitar solo.  This made someone from the crowd yell out, “Oh my God, Mike can really sing.”

It’s not often that you find a grand piano on the Ogden Theatre stage.  However, if your keyboard player is Benmont Tench (also a member of the Heartbreakers) you probably should have one.  Tench has become a in-demand studio musician who has recorded with everyone from Neil Diamond to U2.  He sang the lead on the hilarious Welcome to Hell with a boogy-woogy solo that was extended after Petty signaled for more.  This made Tench show a big smile that is usually hidden behind the piano and his fedora.

Tom Leadon who later wrote songs for the Eagles and became a well known Nashville guitar teacher was the happiest one in the reformed band.  He wore a fancy western style shirt not letting any chance to be in the spot light slip away.  He sang the lead on The Other Side of the Mountain showing off his guitar skills while harmonizing with Petty on the chorus.

Randall Marsh played the drums in a number of bands in Los Angeles, California after Mudcrutch disbanded.  Singing Beautiful World from his drum kit,  Marsh expressed his gratitude of the evening with the songs positive lyrics.

Herb Pedersen a Nashville legend (I know this because that’s how Petty introduced him) looked like a slightly younger Wilford Brimley added to the group’s sound with backing vocals and banjo picking.

Of course, Tom Petty brought it all together.  He sang the fourth song that he ever wrote entitled Save Your Water.  Petty stated, “The guys are letting me play this one that I dusted off after fifty years.”  The best song of the night was Petty’s I Forgive It All.  It described someone content with where they are in their life.  “I ain’t broke and I ain’t hungry.”  Summing up the feeling the band must be having after getting together again after all of these years.

The Shelters from Los Angles, California were the opener.  Tom Petty co-produced their debut album after seeing them perform. Their song Rebel Heart sounds like it was influenced by either the Los Angles based band The Byrds or the other Los Angles based band Tom Petty and the Heartbreakers (I’ll let you decide).  Their sound is a combination of pop, rock, and jam music that got the crowd nodding along.  They seemed grateful for the opportunity of a life time to open for Tom Petty’s pre-heartbreakers band.

See you at the next show.  I will be the one wondering what a mudcrutch is.