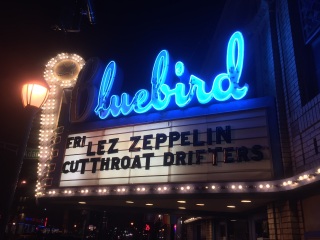 It was an extremely mixed crowd that came out to see the female Led Zeppelin tribute band Lez Leppelin. They performed the sound track of the 1973 movie “The Song Remain the Same” in its entirety. There were kids with their rocker parents, teenagers with their multi-color hair, and same sex couples in their Lez Leppelin T-Shirts. Let’s just say I wasn’t “The Old Guy at the Show” that night.

The group started in 2004 by guitarist Steph Paynes sparking the beginning of the current all female tribute bands Hells Belles (AC/DC), Iron Maidens (Iron Maiden), and Cheap Chick (Cheap Trick) to just name a few. Led Zeppelin was a super group that started Heavy Metal as we know it. It’s not easy to play. The music is a mix of unworldly guitar licks with incredible vocals driven by thunderous mythical drumming. Lez Zepelin recreated it admirably with passion.

A funny video with the band members re-enacting the beginning of the very seventies influenced film “The Song Remains the Same” started the show.

“Dazed and Confused” with Conley’s insane vocal range and Paynes’ master guitar playing was definitely a highlight. Squyres played the lengthy “Moby Dick” drum solo. She looked so intense during her drumming the crowd started to worry about her (she’s okay. Paramedics were not dispatched). Steph Paynes brought out a double neck guitar similar to the one Jimmy Page played in the movie that weighed more than her. After a few songs, she pleaded with the band for permission to put it down. Near the end of the evening the crowd starting yelling out requests that were not part of the movie missing the point of the show. But Conley charmingly declined and told them, “We will play the other songs another night.” One of the inebriated fans offered his Beaver Baseball Hat to the “All Girls All Zeppelin” group. It was accepted with gratitude and puzzlement making the song lyrics of “Dazed and Confused” come to life.

The Cutthroat Drifters, a local band lead by Nick “Black Beard” Kjolhede, warmed up the crowd. The singer came out with a white fur coat, sunglasses, and rings on every finger. (I am so glad I didn’t wear my similar accoutrements. We would have matched and that would be embarrassing.) The old school rock quartet played a high-energy set featuring the dancing styles of Kjolhede with moves somewhere between Axl Rose and Pulp Fiction’s Vincent Vega. They ended with a cover of Bad Company’s “All Right Now” getting the crowd ready for a night of Classic Rock.

See you at the next show.