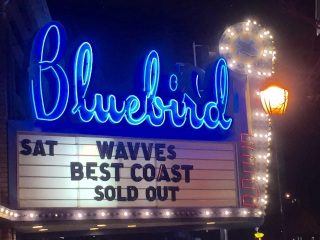 With the recent mid-winter heat wave, it was a perfect time to soak in the Summer is Forever II Tour on Saturday Night. It’s the sequel to the 2011 co-headling tour with California Bands Best Coast and Wavves. Walking into the venue I saw the back drop of the stage consisting of a comic book characterization of the band members. I knew this was going to be more like an event than a show.

Lead singer, Nathan Williams, stopper the show four songs into  their set. He gave the guy in the Slayer Shirt near the front of the stage all the money in his pocket to stop singing along with the band. (I wonder how many performers dream of doing that to their devoted obnoxious off key fans.) After throwing a large wad of bills at the guy, the show was officially on it’s way.

That’s when the crowd surfing began. From what I can tell, the goal of crowd surfing is to trust a drunk teenage audience to lift you up, pass you over their heads, and on to the stage. This is when you stand up next to the band, put you fist in the air, and jump back into the arms of the drug induced crowd. I don’t know why this is fun, but it seems half of the 550 capacity crowd tried it. Some failed and landed on the beer and vomit soaked floor. Others succeeded and were groped to and from the stage. My favorite was the one rebel who made his way on to the stage and tossed his shoe into the audience before entrusting the crowd with his life.

Just when I thought the crowd surfing couldn’t get any more entertaining…. that’s when the aliens arrived.  Wavves new album has a song titled “Heavy Metal Detox.” When Williams starting singing the lyrics “We are Not Alone” alien balloons were released into the crowd along with round non alien shaped balloons. The traditional balloons were volleyed around, but the aliens were horded away like lost treasure.

Before the cash bribes, shoe throwing crowd surfers, and alien invasion Best Coast took the stage. A pant-less Bethany Cosentino wearing only a large Sublime T-Shirt (she stated she was dressed to go to bed) lead the band along with recently slimmed down guitar wizard Bobb Bruno through Surf Rock inspired pop songs.

The former Lush Sales Associate (Cosentino) and studio producer (Bruno) started the band in Los Angeles, California. They have been growing their audience stronger every tour. This might of been the last time to see them play in such a small venue.

Another Los Angeles, California band Cherry Glazerr named after a National Public Radio Reporter opened the show. The band started in 2012 when singer Clementine Creevy was in high school. Dressed in a pajama like pant suite, Creevy lead the band through a mix of fast and slow catchy pop songs. I can only hope to be as happy as their drummer Tabor Allen. He had a permanent smile on his face the entire time he was smashing the drums. The pop songs started a mosh pit for reasons that are beyond my comprehension. That was a sign for the events that were about to come for the remainder of the California Music filled night.

See you at the next show.  I will be the one hiding from the mosh pit, crowd surfers, and aliens. 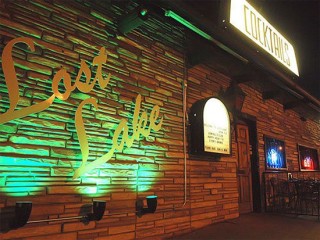 Sometimes when I am standing in the middle of a crowd half my age, I ask myself…What am I doing here?….Is this where someone my age should be on a Tuesday Night?…Does everyone think I am one of band member’s Dad? These thoughts disappeared when I saw Diane Coffee perform during their first headlining tour on Tuesday Night at the sold out Lost Lake Lounge on East Colfax.

Shaun Fleming, the former child Disney actor and Foxygen drummer, lead a talented group of musicians on a very entertaining over the top bigger than life musical ride. Diane Coffee is named after the Supremes diva Diana Ross and a song by singer songwriter Nathan Pelkey. It’s an all male Psychedelic Motown Band. The lead singer Shaun Fleming becomes Diane Coffee when he performs. It’s confusing. But just role with it.

The band all dressed in matching suites started the show with a James Brown like vamp. This built the tension up enough for Shaun Fleming to make a dramatic entrance wearing a suite one would find in the petite section of Ann Taylor and Ziggy Stardust like sparking eye make-up. He pranced around the stage while passionately singing selections from their debut album “My Friend Fish” and sophomore release “Everybody’s a Good Dog.” He memorized the crowd with his mixture of Tom Jones, David Bowie, and Cher antics. Hexagon screens behind the stage displayed a variety of images throughout the performance such as melting colors, dancing soldiers, and 1950’s bondage footage.

Fleming/Diane Coffee disappeared during a musical interlude to appear in a “I Dream of Jeannie” like ensemble. This is when his guitar amplifier blew out. Shaun Fleming smiled and asked if someone could spare one. The opening band Flaural brought one on stage immediately. Meanwhile the band remained calm and just played on while Fleming crawled around trying to get his guitar to “kind of” work. He put the guitar down and serenaded a beautiful star struck blond in the front row to their love song “Green” while sitting on an amplifier (this one didn’t blow out).

Fleming told the crowd he would have to cut it short due to the technical issues. It was heartbreaking to see the house lights come on after he left the stage. But he definitely left the crowd wanting more.

The opening band was I Am Love a Pennsylvania band that relocated to Denver last year. They describes their sound as Psychedelic Vaudevillian Goth Grunge. Singer, guitarist, and autoharp player Joshua Christopher lead the distortion heavy band through some very trippy numbers. Their songs seemed to build slowly and smooth out when Davy Timm switched from the keyboard to the trumpet. Joshua Christopher bantered between songs through echo effects.

Flaural performed next as the 150 capacity crowd started pushing their way to the front of the stage. The New-Wave Psych Pop Band (Are you seeing a pattern?) from Colorado is getting ready for a two month tour. The songs flowed very well for a group that just formed last year. Lead by Colin Johnson who wore a Kurt Cobain like sweater and knit hat in the extremely warm venue under hot lights. I was told that they have come close to selling the venue out by themselves.

I am expecting Diane Coffee to return soon playing to a larger audience in a bigger venue with more songs, costumes, and stage spectacles. I feel very fortunate to see the dynamic performance in such a small intimate setting despite the technical difficulties and it being a Tuesday.

See you at the next show. I will be the one not wearing makeup.