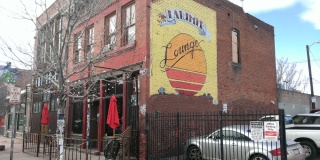 I am a Jack White fan. I have seen him perform with The White Stripes, The Raconteurs, The Dead Weather, and solo. I even have an alter… I mean a collection of his concert posters displayed at Old Guy at the Show HQ. So when I heard his record label, Third Man Records, was putting together a punk rock package tour, I had to go.

Audio Social Dissent Tour is made up of three bands that released records on Jack White’s label:  Wolf Eyes (Noise Band from Detroit, MI), Timmy’s Organism (Punk Band from Detroit, MI), and Video (Punk Band from Austin, TX). According to Third Man Records, the mission is to have people “participating and having their heads ripped off when the sound of the streets creeps out of the sewers and into a packed out sweaty and loud venue.” The Larmair Lounge in Denver, CO seemed to meet that criteria for the eighteenth stop of a twenty-seven city tour.

Two local bands opened up the show. I caught the last few songs of Echo Beds set. Keith Curts and Tom Nelson use oil cans, symbols, bass, and assorted electronic devices to make a dark haunting industrial sound. It was the best oil can duo I have ever seen. The next band was Civilized. A hardcore four piece screamo band lead by singer Zach Reini. He jumped off the stage, took his shirt off, and scared the audience enough for everyone to back up about twenty feet mainly because of the sight of his tattooed torso. Civilized have stated that their music is a violent reaction to their environment. My reaction to their music was just fear… for my life.

The first featured band was Video. TV’s Daniel lead the band dressed in all of his black leather fringe glory. If you were unfortunate enough to see the movie Rock of Ages, Daniel looks like a tall punk version of Tom Cruise’s character. At one point, he shouting at the audience to “drink it in” over and over again. I thought he was talking about the band’s greatness. But that’s how Daniel introduced the song “Drink It In.” Their set was full of attitude and rock and roll spirit that was lacking when Civilized frightening the audience. Before playing their last song, Daniel yelled out, “Since we are so generous. We are going to do you a favor and play one more song.” This made them not only a solid band, but a hilarious one.

Next up was the legendary cult band Timmy’s Organism. Lead singer Timmy Vulgar is hard to miss with his Ben Franklin style skullet. Right before the band played a note, he politely asked the audience to move closer to the stage. This put the crowd at ease and set the atmosphere for everyone to enjoy a heavy rock punk acid glam set of music. The drummer, Blake “Bovver” Hill, used incredibly long sticks that intensified the driving beat along with Timmy’s wailing guitar. For the final song, Timmy reenacted their video for “Heartless Heathen” by wearing a silver cape and rubber mask. It’s more special effects than I expected for the $14 show.

Wolf Eyes was the final band. They are a self described Trip Metal Band that started a little less than twenty years ago. They have

over 150 albums, create their own instruments, and are Detroit Noise Icons. The majority of crowd was bobbing their heads to their sounds. I don’t think I am smart enough to understand what was happening. I left after only a few songs because the racket of a slinky going down stairs during an earth quake is not for me.

Jack White is full of surprises. Third Man Record’s first package tour did not disappoint in keeping me guessing. Kind of like when I turned on the television and saw Jack White singing a Stevie Wonder song to Kermit The Frog on this week’s The Muppets. (Yes. That really happened).

See you at the next non-slinky noise show.