Weird Al Yankovic at Hudson Gardens in Littleton, CO on 8-6-16 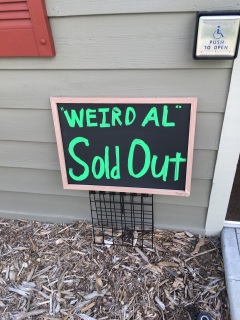 You might think the audience at a Weird Al Yankovic concert would be made up of little kids, people with mental challenges, and fat middle age men who still live in their parents’ basement… and you would be right.  If you were not white and nerdy enough to go, you missed an amazing night of parody music that spans decades.

I remember hearing Weird Al’s version of Queen’s Another One Bites the Dust transformed into Another One Rides the Bus when I was in elementary school.  I was amused by his ridiculous lyrics back then as I am now.

Weird Al Yankovic’s Mandatory Fun Tour is a multi-media concert with video clips shown between songs exhibiting how he has snuck into to the pop culture landscape. The videos feature Weird Al Jeopardy questions, sit-com references, and movie cameos.  The funniest was a clip from The Big Bang Theory asking how old are you if you still listen to Weird Al?

The show started out with a live video shot of Weird Al dancing and singing to his version of Pharrell’s Happy altered to Tacky through Hudson Garden’s picturesque scenery.  He worked his way up to the stage to a sold out smiling audience wearing Hawaiian shirts, Star Wars garb, and aluminum foil hats.  It’s kind of a nerd cult.

Between almost every song Weird Al changed into costumes from an Octopus to a Jedi.  If he wasn’t running around playing his accordion, he was backstage frantically getting into an elaborate ensemble.

His skillful band played every type of genre of music including rap, grunge, and polka while never cracking a smile.  That’s a difficult task when your band leader is dancing like a spaz and singing about food.

After playing the video introduction to his famous Michael Jackson send up Eat It, Weird Al came out wearing the infamous fat suit.  The crowd sang along to the lyrics “Have a banana/Have a whole bunch/It doesn’t matter what you had for lunch” in joyous nerd harmony.  The suit got in the way during Weird Al’s dance moves making him drop the mic.  It’s difficult to pick up with a costume with man boobs.

Another highlight was his take on Nirvana Smells like Nirvana.  The brand all dressed in flannel complete with goth cheerleaders rocked out like it was 1991.  After his gargling solo, Weird Al threw his water at the crowd landing on this old guy at the show.  Don’t worry.  I am Weird Al germ free.  I got tested.

After a fake interview with Eminem illustrating the rapper’s poor grammar, Weird Al came out with his send up of Robin Thicke’s Blurred Lines entitled Word Crimes.  Not too many people can have a crowd cheer to a song about the proper use of a contraction.

After leaving the stage in a James Brown fashion complete with a cape, the band returned for the highly anticipated Star Wars themed The Saga Begins.  It was an elaborate performance complete with dancing Storm Troopers and Darth Vader.  It amazed me how half the crowd sang along to every word of the complicated lengthy song.  That led into Yoda.  Weird Al’s take on The Kinks’ Lola.  The kid with the Yoda back-back near me was in Star Wars Geek heaven.

See you at the next show.  I’ll be the one wearing a tin foil hat not covered in Weird Al’s spit.   I showered.