Michael Franti, A Great Big World, and The Rua in Denver, CO at the Ogden Theater 12-9-15 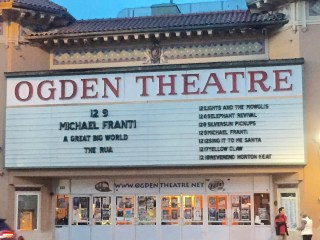 Seeing a Christmas tree on stage along with local disc-jockies wearing ugly Christmas sweaters, I was fearful that I entered an awful office holiday party.   But instead of hearing songs about a supernatural reindeer freak, three amazing striped down sets were performed with only one Christmas song (that was quite good).

With all the horrible news from Paris, Colorado Springs, and San Bernardino, it was refreshing to see Michael Franti performing with a positive message about peace.  The six foot eight inch dreadlocked vegan barefoot musician from San Francisco, California was inspiring. Accompanied only by J Bowman on electric guitar, Franti performed his hits between stories about his life, family, and positivity. During his song about his new bride, “Life is Better with You” a couple near the front got engaged.  Franti witnessed it and made them re-create the moment on stage which moved Franti to tears.   (She said yes by the way.  Maybe she didn’t want to say yes, but was pressured by the moment to say yes.  Anyway, I wish them the best.)  Michael Franti introduced the song “Once A Day” about overcoming the challenges of his son’s kidney disease.  The song begins as a rap and turns into an anthem about rising up.

Franti jumped off the stage and joined the crowd to perform  “I’m Alive (Life Sounds Like).” With a wireless mic, he danced through the crowd and climbed up to the balcony all in his bare feet.   This is not an easy task since the floor at the Ogden is disgusting to walk on even in shoes.  It was very powerful to hear the repeated chants about being alive with the crowd jumping up and down in unison.  Michael Franti repeatedly asked the audience to hug the one they love.  This made my single friends ask if they should slash their wrists.  (They didn’t. They’re alive and doing well.  Stop worrying.)

Appropriately, Franti ended his set by playing Bob Marley’s “One Love” and jumping into the crowd once again.  He stayed to take selfies until a few mesmerized woman got a little too touchy.

Before Michael Franti took the stage, A Great Big World, a duo from New York made up of singer songwriters Ian Axel and Chad Kings performed in their holiday sweaters.   Axel played the keyboards with such intensity it was hard for him to remain seated and in his deer sweater (he took it off half way through their set).  Kings remained calm with a constant smile on his face probably due to the chilly penguin that adorned his sweater.  The highlight was when Ian Axel played their hit “Say Something” alone on stage.  The version was so impressive, I almost forgot that this was performed with Christina Aguilera on the recorded version.

The show started with The Rua a charming band from the United Kingdom made up of siblings Roseanna Brown on lead vocals and guitar,  Alanna Brown on vocals and keyboard, Jonathan Brown on vocals and violin, and a laptop on drums. When Roseanna stopped the first song when she realized her guitar was not plugged in and declared herself an idiot,  I became a fan.  I was surprised how confident they were on stage for being so young.  This was explained when they revealed acting in the Harry Potter films at an early age.  They even had the crowd guess what houses their characters attended at Hogwarts for sweets.  (I didn’t win because those movies are for children and I am the old guy at the show.)  The Rua played the only Christmas song of the night, “Have Yourself A Merry Little Christmas” with impressive harmonies from all three of them.   It made it difficult not to be in the Christmas spirit.